All the many small bike trips that I have done so far were enough to convince me that I really enjoy this stuff of doing tourism on a bicycle. As the end of my exchange year in the Netherlands approaches (return flight to Brazil is on mid-August), I realized that I had to do something really special during my last month in Europe, specially because I will have an entire free month between the end of my academic period and my flight back to Brazil.

My Eurotour back in 2009 (while I was a high school exchange student in Germany) provided me the chance of visiting most of the cities that I wanted to visit in Europe (or at least Western Europe). I already had my fair amount of Western Europe major capitals sightseeing, which means that now I have some spare time to do something different. Something that would expose me to new cultures, places and experiences, but in a different pace than the average backpacking-by-train tourist.

And that is how my “Big Summer Trip” idea was born! Although it may not be that long or hard to most of the experienced touring cyclists, this will be (by far) my first trip over 500km. Until now, my plan is: to leave home, catch the EuroVelo 5 international cycling route and follow it until Zurich, through Belgium, Luxembourg, France and Germany. 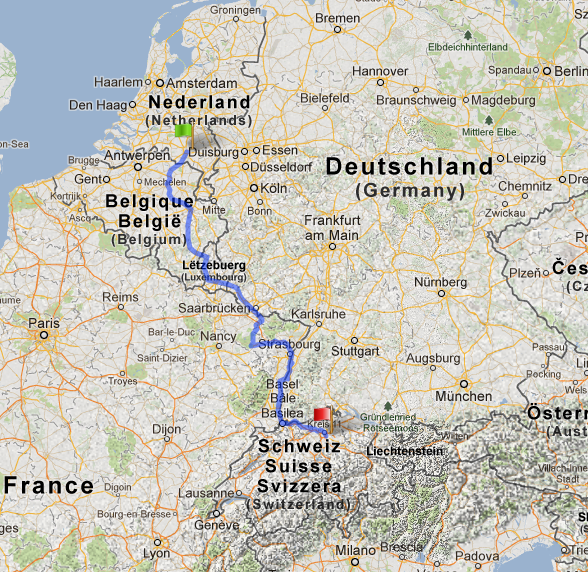 First draft of my route.

However, as explained in another post, I am seriously considering continuing the trip after I arrive in Zurich. The idea is to go to Liechtenstein, Austria, maybe to Germany again and finally to Czech Republic.

If you have any hints on places to visit and things to do along my route, please let me know (you can use the comments box below)!

I will keep this page updated with the status, and posts related to it will be under the same category on the blog.